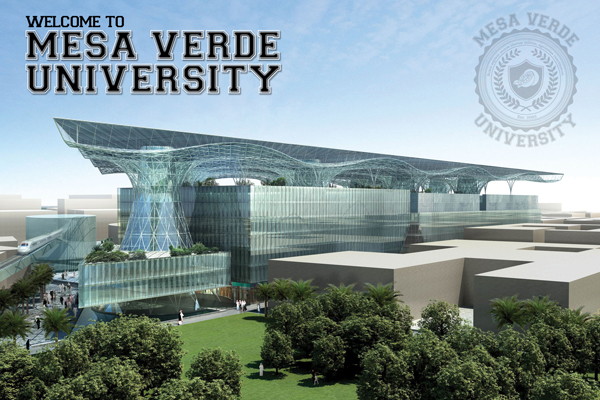 For many of us fans the Horizons pavilion in EPCOT Center will always hold a special place in our hearts. While it closed years ago it lives on for many in the ride’s dialog and many can recite it from memory. One particular part of the attraction recently inspired us to create several t-shirt designs, the first of which (oh yes, there are more on the horizon!) we are revealing today..

On the outskirts of a well established desert landscape where storms roll in from the north and harvesters tend to Lorange crops lies the agricultural driven campus of MVU. Established in 2083 by a grant from Edias Clevenshoe (the philanthropic founder of Pegasus Industries) the university was chartered to create the the agronomists of tomorrow. The dedication to the cultivator arts is evident in the MVU motto which reads:

You can become an alumni of the distinguished Mesa Verde University (MVU) – where you too can graduate a farmer, err… agricultural engineer in a scant seven years time. Now you can show the world that in your spare time you have the authority and the geoponics know-how to grow Pinanas, Pepcumbers and Circuit Egg Ivy!

Because registration is limited, we’re only accepting students for the next 7 days. If you miss this opportunity to become a part Mesa Verde University, you may have to wait for the next registration period – which may not happen if we don’t get enough students registering. Click below to jump to the store and get your gear before they are gone! 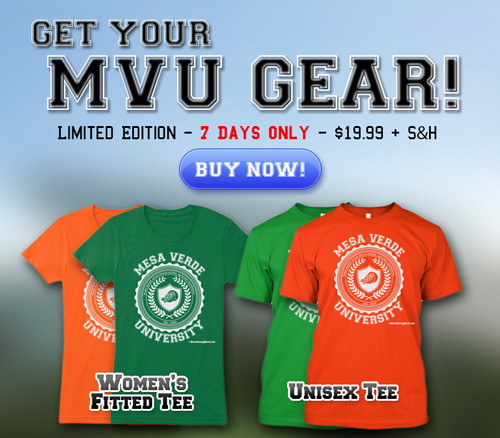 About the University Store

We’re excited about offering Mesa Verde University gear, and if we sell enough tees with this test run, we’ll be opening up a “Mesa Verde University Store” where you’ll be able to pick up all kinds of MVU gear for your college classes. So if ya dig the shirts, buy one. If ya can’t tell others about it via social media. Sometimes getting the word out can be just a valuable as a purchase. And besides, who wouldn’t want an MVU notebook for next semester or a nice throw to curl up under this fall?

What and Where is Mesa Verde University?

Totally made up dude! Seriously. 🙂 In the desert farming scene in Horizons where the narrator says: “Isn’t it something! Send a city kid to college for seven years and what happens? She becomes a farmer!”. Then his wife responds, “Oh, I think agricultural engineer is a little more like it.” We’ve designed what we think that daughter’s college t-shirt might have looked like – complete with the Mesa Verde University motto written in Latin.

We made a few “ads” to help promote the shirts, Enjoy! 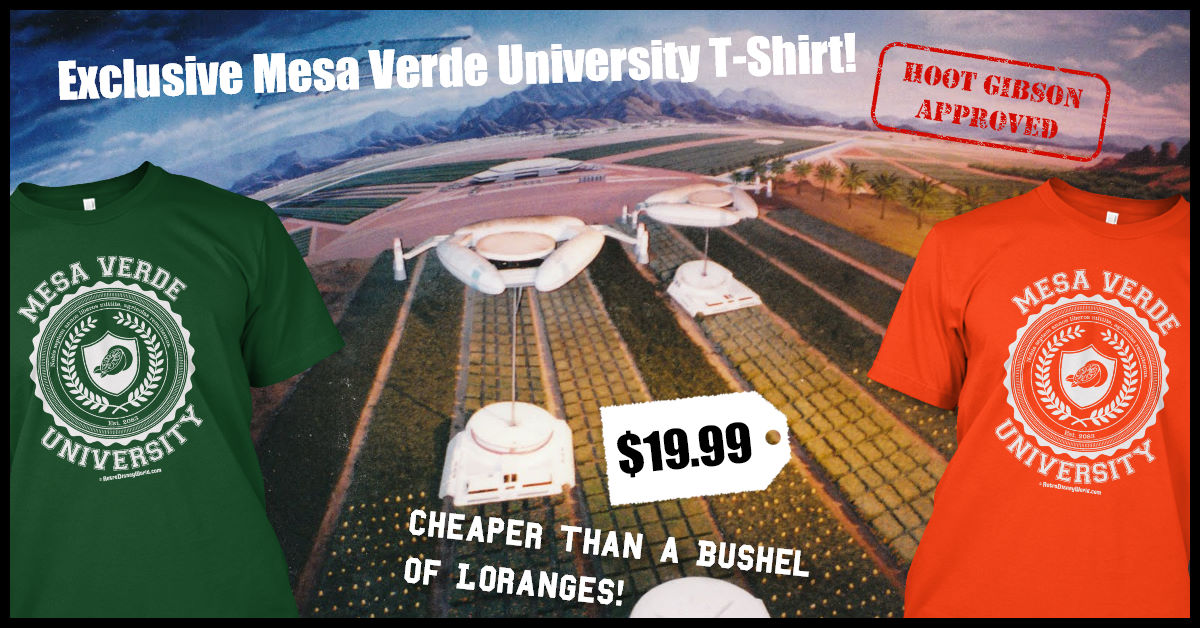 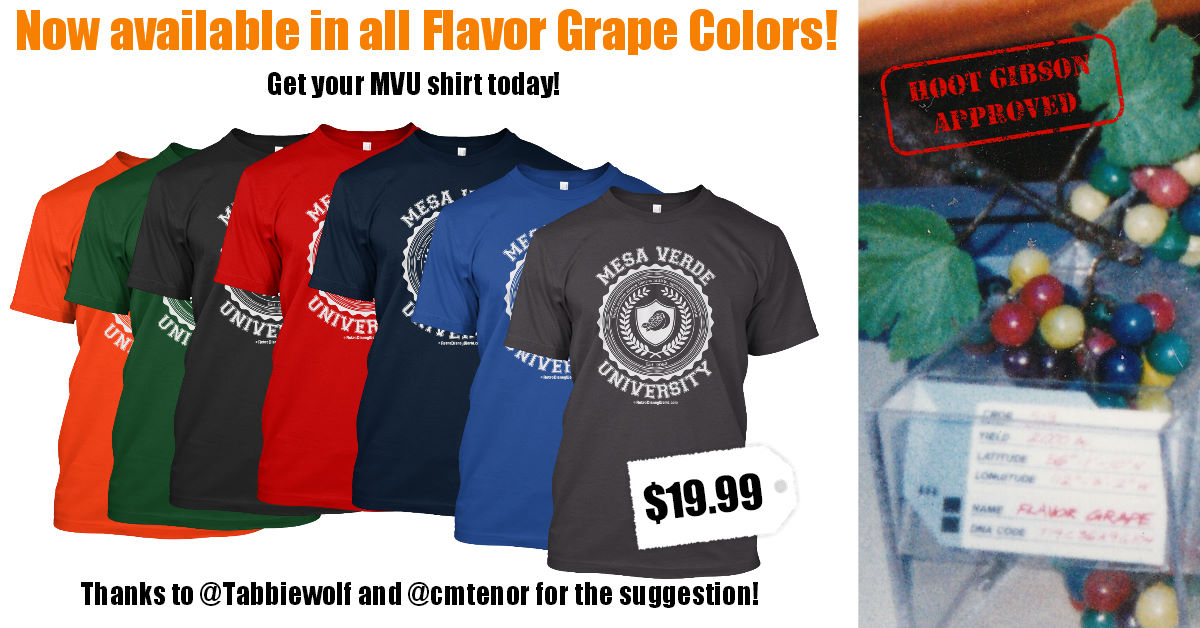 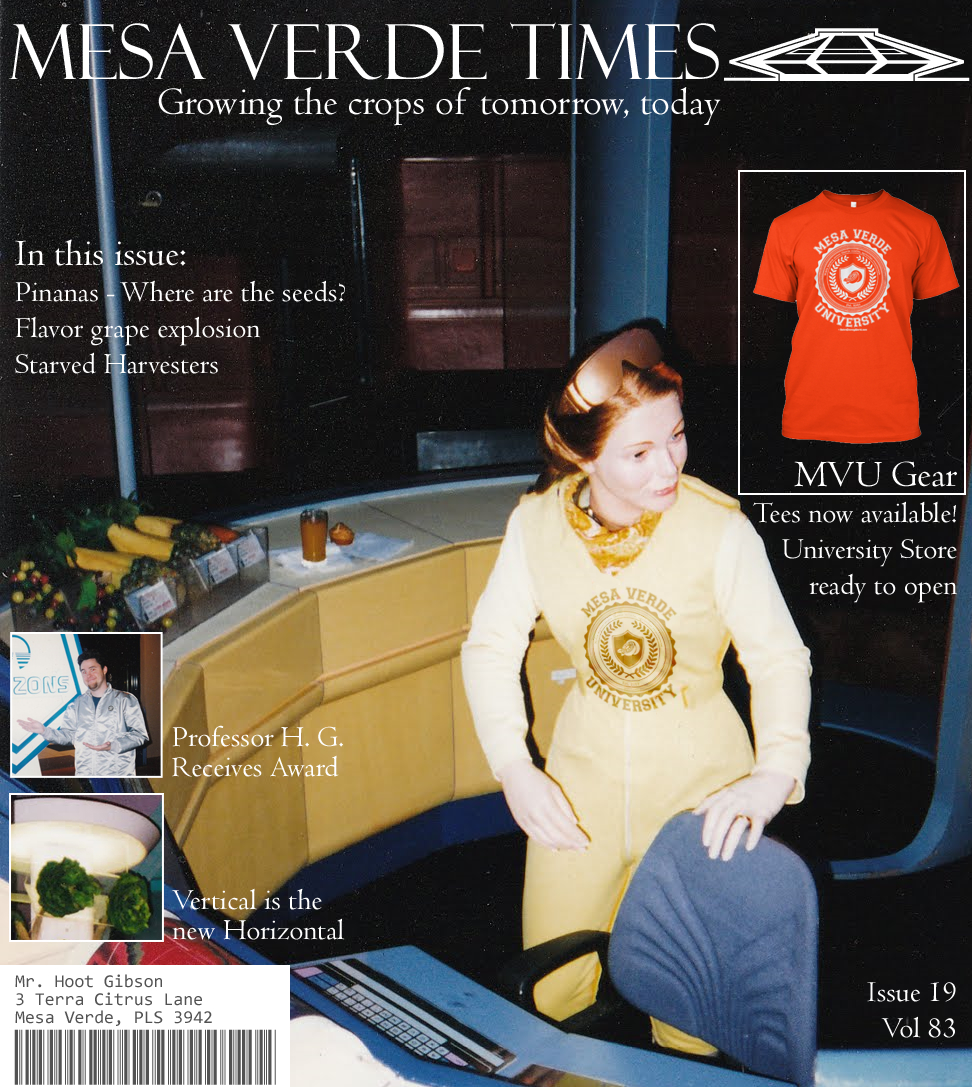 You guys are the best! This is the most awesome thing ever! Wish I could get a diploma from here!

love it but i would work the circular horizons emblem into the crest, if that’s legal