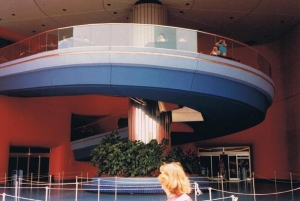 When EPCOT Center opened on October 1, 1982, one of the original attractions that day was World of Motion.  In my opinion, World of Motion was good.  It wasn’t Horizons, but as far as favorites go it was up there.

World of Motion was sponsored by GM, the first corporation to sign with Disney to sponsor an EPCOT pavilion.  World of Motion was located in Future World East, next to Horizons.  It was a large, stainless steel, round building.  It was 65 feet high and 320 feet in diameter.  Basically, it was a giant silver wheel, which offered guests a visual clue of what the attraction was about.

World of Motion was designed by Animators/Imagineers Ward Kimball and Marc Davis.  Buddy Baker and X Atencio wrote the lyrics for the attraction’s theme song “It’s Fun to be Free” and Gary Owens provided the narration.  Gary Owens’ manner of delivery was very serious and provided much of the humor in the attraction because it contrasted with the scene you were seeing.  While Gary Owens was serious giving us a very historical account of transportation, the scenes were humorous.  For example, Gary Owens tells us, “Another kind of horse arrives.  A steam powered, iron horse bringing fast, dependable, safe travel to the new frontier.”  But, what we see is a steam powered locomotive being stopped by bandits who are demanding the passengers’ valuables.

World of Motion traced the development of human transportation from foot power to the present and into the future.  It was a fun, whimsical, 15 minute ride and it hosted the largest audio-animatronics cast ever produced by Disney at the time.

As guests approached the building they walked up a ramp and boarded omni-mover cars on the second level of the pavilion.  As the ride began, the cars made their way up another ramp on the exterior of the building.  In fact, guests passed under this ramp as they entered the attraction.  Once inside, we were treated to nearly 22 different scenes on the history and future of transportation.

One of the most iconic scenes from this ride was the “world’s first traffic jam”.  It looked as if a new-fangled motor car collided with a horse drawn cart carrying fruits and vegetables, which were strewn all over the street.  Kids, a police officer and bus passengers stared in awe at the mess.  One worker popped up quite regularly from a man hole with fruit spilled on his head.

The ride ended looking at the future of transportation with another iconic scene – the city of tomorrow – Center Core.  Center Core was six stories high and featured gleaming blue and green buildings, streets, airships and people movers.  Once guests exited the ride vehicles they entered the post-show area – the TransCenter.  TransCenter contained five main exhibit areas.  Aerotest demonstrated aerodynamics; Bird and the Robot was a comic presentation about robots working in the automotive industry; the Water Engine featured nine cartoon characters debating the pros and cons of internal combustion engines; Concept 2000 looked at automotive design procedures; and the Dreamers Workshop showed future technologies.  The TransCenter was interactive and even had current GM cars for guests to sit in, look at and dream.  I have to admit, I never spent much time in the TransCenter.  I never was very interested in cars.  I usually just breezed through the post-show area on my way to the next attraction.

World of Motion’s last day of operation was January 2, 1996.  I remember visiting Epcot in 1997 and riding the monorail through Epcot.  I was shocked to see over the construction walls the piles of dirt and the entire ride being gutted.  On March 17, 1999, Test Track opened where World of Motion once stood.   You can still see the stainless steel exterior and the building is still huge, but that’s about all that remains of the original World of Motion.  Test Track has become one of my favorite rides, but I will always miss World of Motion.

Horizons was and always will be my Favorite Extinct Disney Dark Ride Ever !
but World Of Motion comes in second…I absolutely loved the humor of this ride.
It is always will be sorely missed…
Thankfully we have our videos to remember