This is the first video restoration that we are releasing…We couldn’t think of a better attraction to start with other than Horizons! Martin Smith, whom you all know from his Ultimate Tributes (www.martinsvids.net) was kind enough to send me this footage from June 1990 for enhancement/restoration.

A few things before you jump right to the video. Some of you will ask, if this was shot in 1990, why does it look “softer” and less realistic than the 1972 footage you recently restored? The answer is very simple – The footage shot in 1972 was film, which I sent off for conversion – it was scanned in at 1080 lines of resolution, the same as HD television. The 1990 footage was filmed in PAL (European video standard) and only has 576 lines of resolution – we can’t scan this again, what we get from video is it! Its interesting that older footage in a way can provide a better experience with today’s technology… 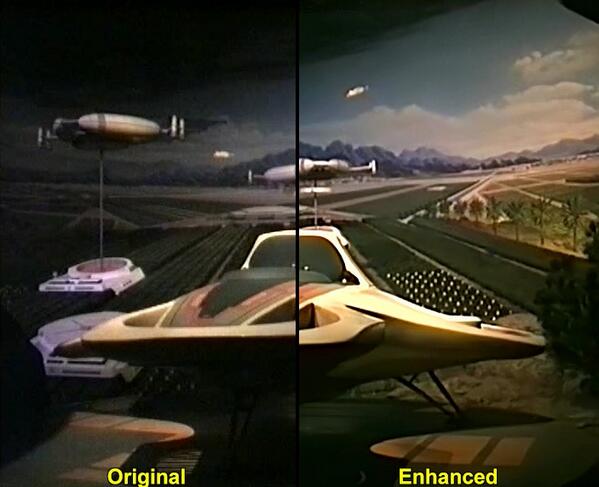 Martin supplied me a “rip” from the DVD, while the quality is excellent, it is no where near perfect. DVDs are the WORST possible way to archive your videos because they compress the footage into a smaller package and the chemical dyes in the disc will eventually fail over time, rendering your memories useless. On a screen DVDs may look wonderful, but when you take them apart frame by frame like I do for restoration, the artifacts from the compression begin to show. Imagine the video as a giant flip book – in a perfect world we’d have one page for every frame of video, just like in an animated film; on cell for every frame. However with DVD and other compression methods, each frame is not saved, instead they store parts of information about frames and the difference between each, this tells the video what has changed in the next frame and what has not. Complicated? Not really, but I may have put half my readers to sleep by now.

If Martin still had the S-VHS tape that contained this footage, we would start from that and could make this restoration even better. Fortunately the transfer that Martin had done years ago was very good so our starting point, while not perfect, its pretty darn good.

Feedback is always welcome; as are pointers and hints of where we can find new source material. Martin has supplied me with another Horizons video and we are working on obtaining an original DV tape transfer of what we think is the most pristine Horizons footage ever. As always you can reach us at imageworks@retrowdw.com

We aren’t done….spread the word, and Enjoy!

And for those interested, here is an approximate side by side comparison of the source video as compared to the restored video. This is not as good quality as above, but you’ll see the differences:

This is by far best Horizons video I’ve seen on the web, I think it even looks good full screen, the low light scenes in the beginning with Jules Verne and the 50’s black light scenes look great, and across he board there is have a lot of details I haven’t seen in any other web-vid. My only suggestion is that when it goes completely to black in between scenes, the auto filters your using seem to enhance the artifacts and noise in the video image. It only happens a few times In noticed it the very beginning on the… Read more »