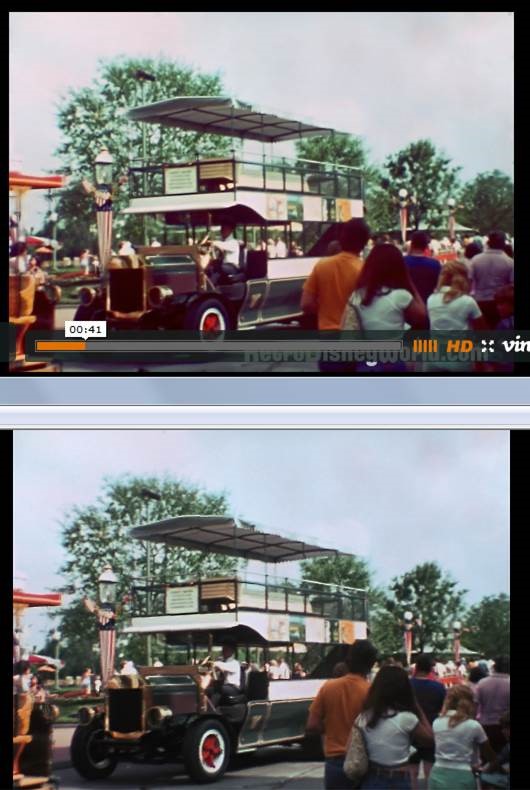 In October 2014 we released a film entitled 1976 Magic Kingdom Swan Boats and More – It is now nearly June and in those short 8 months we’ve restored numerous films and through trial and error we’ve improved our restoration and color correction process. So much in fact that we are now going back through some of our previous restorations and doing them over again.

On the left is a quick comparison, the top is the old version and the bottom represents the remastered version. You’ll notice the colors are more true to life. Don’t get me wrong, by no means is this now a perfect restoration, but its way better than what we had before. Time consuming? Yes but totally worth it. Enjoy this newly remastered version of the film!

“Sometimes things on eBay pop up that are worth spending a few dollars on. Sometimes you know whats on there, and sometimes you are purely taking a chance. With the help of a friend we were able to secure a few reels of Magic Kingdom footage from 1976. With a total running time of of nearly 5 minutes we are first treated to ride on the Peoplemover – oh how I long for the days of the StarJets!  Next up is about 1.5 minutes of on-board Swan Boats footage. Jungle Cruise is up next (no frogs this time) and then a trip on the train. A fantastic shot of the Tomorrowland Speedway from the train is tucked away at the 4:06 mark.

Technical Details: The color on this film was terrible to start with, and in the end its just OK by my standards. You’ll notice that the color in each scene changes, demonstrating a inexpensive camera, poor quality film/developing or a combination of all. Its very difficult to apply a general color fix across all scenes, but we did the best we could. Scene by scene adjustments is not warranted in this case.”