Home » RetroReplicas » The Horizons Model – A Look Back Forward

One of the goals of my original Horizons project was to one day make a physical model from the 3D “virtual” model. I had intended to possibly employ 3D printing or rapid prototyping as part of the process in making my own personal architectural model of this beloved EPCOT Center former attraction.

I started on it ten years ago (2003). And I made pretty good progress on it during the first couple of years – working on and off as time afforded. But real life has a way of interrupting those projects that you do just for the love of it.

I started with some pretty basic software and techniques and the model and its complexity and rending realism have increased as my skill has through the years. I’ve also gone back and improved its accuracy as I have been able to gather more reference material from publicly available sources.

Here’s a look at some of the early renderings: 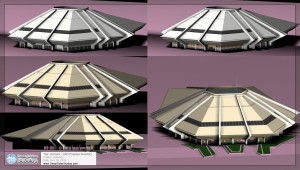 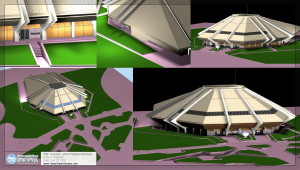 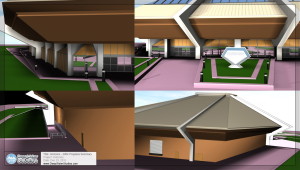 In 2005 I began to utilize a more realistic rendering technique that led to better lighting and shadows on the model & surrounding landscaping. I also transferred the model into a newer and different 3D modeling software package. 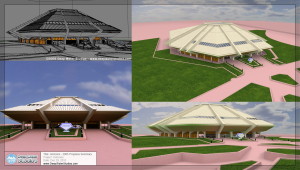 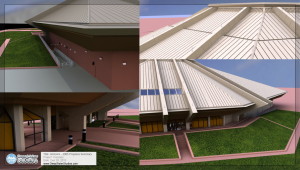 Life can quickly sidetrack a project and around 2007 I had to let the Horizons project go into hiatus as more pressing priorities vied for my time. Occasionally, I’d open up the old files and render out a new shot. It was even transferred through a couple more packages during this time as I tried out new software. Each time I tried to make the renderings as realistic as I could.

I even fiddled a bit with importing the model into a gaming engine or two to see what it would be like. But when I saw what Chris had done over at Horizons Resurrected, I knew he had that well taken care of.

Here are a few random renderings I created during this time: 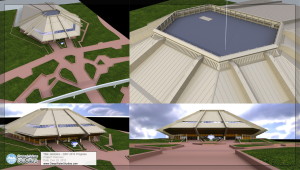 In 2013 Todd, the owner of RetroWDW.com, contacted me asking if I might be interested in creating a series of scale models of former and current Disney theme park attractions. Seeing that we both had similar interests and a dedication to quality I joined him in creating – Retro-Replicas.net.

We’re going to combine my 3D modeling skills along with Todd’s scale model manufacturing experience and we’ll bring highly detailed and accurate architectural scale models of beloved Disney theme park attractions to life in limited-edition models available for purchase. We are also looking into producing smaller, high quality models so everyone can enjoy a bit of that Disney Magic in their collections.

Now, the road to producing fully licensed, high quality products, especially ones of this complexity and intricacy, is a long and difficult one. And as I’m sure we all realize, Disney is bombarded on a daily basis with requests to license everything under the sun with their name on it. As such, they have a very rigorous process in deciding with which products to associate the Disney name.

Where YOU Come In

We realize the market for these models is not as huge as your average Disney product, but we believe it to still be a very viable one. Over the years I have had countless people ask when or if I was going to make one of my models into a “real one” that they could buy. So we’re going to produce a couple prototypes of the Horizons model and we’ll post updates on our progress here on Retro-Replicas.net first. I’ll post updates to my site & social outlets the next day. So to get the latest progress updates first, come here.

We’re going to need your help in creating a buzz for these models in the Disney community and on the internet in general in order to convince Disney to allow us to license them. They need to see that there are enough individuals out there willing to put their money where their mouth/tweet/likes are.

So if you’d like to see this project succeed and to be able to purchase highly detailed models of Disney theme park attractions, help us get the word out about Retro-Replicas.net and our progress.