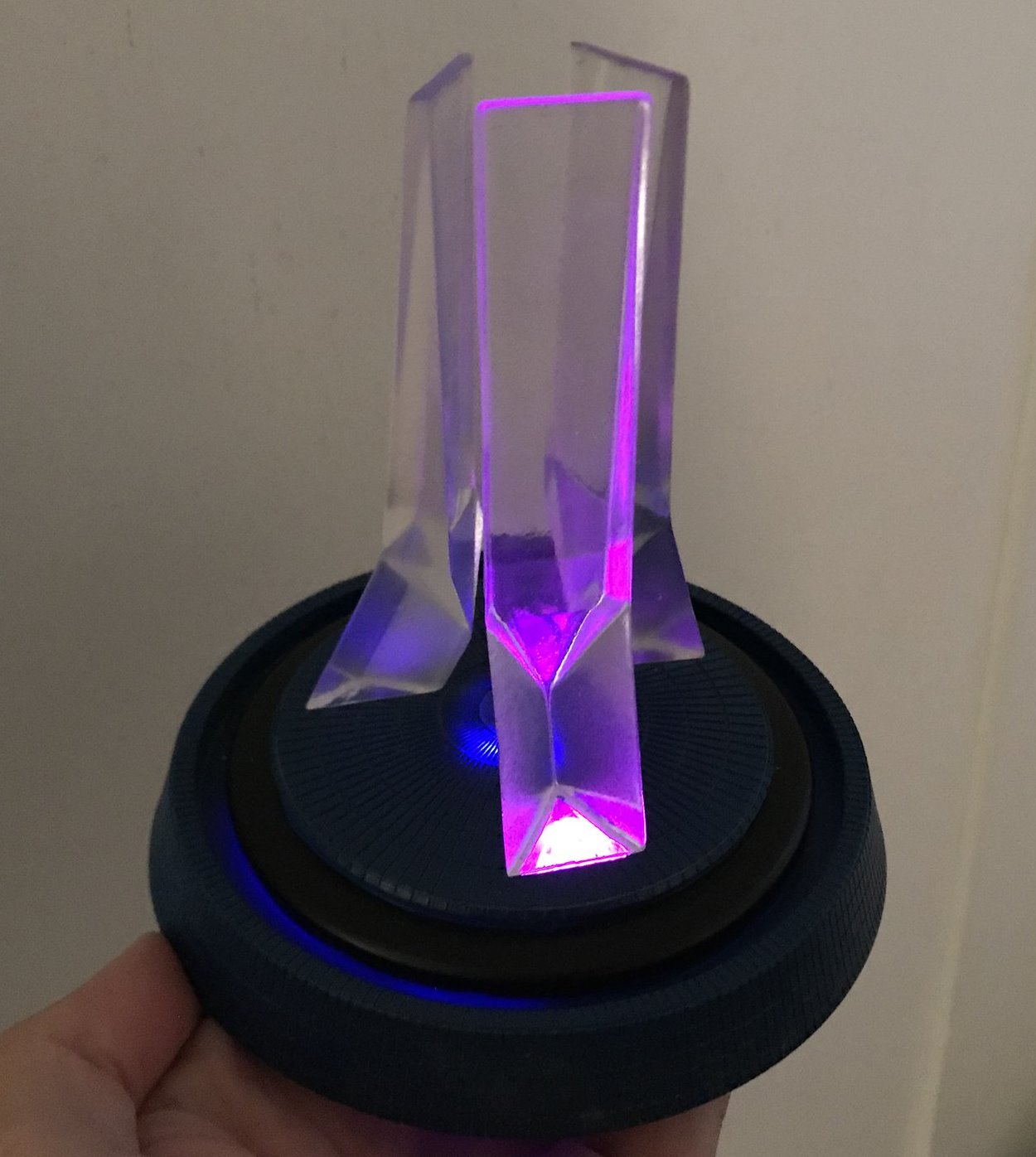 When we first decided to host an EPCOT Center event we always knew we wanted to give out a gift to the attendees. We also knew that a pin or bag wasn’t going to be enough to set apart not only the gift, but the event itself. We went down the path of metal coasters and even a 12 sided rubiks cube with the different pavillion logos. I always wanted to make a replica of the fountain so after all this talk and idea swapping I just decided to go ahead and ask our Disney event coordinator if we could make it.

About a week later, we got the OK as long as the fountain didn’t have any Disney logos or IP. That is not a problem.. but wait, its August 9th, we need these for September 30th, time to kick it into high gear!

Jason from Deep Water Studios, myself and Brian Miles immediately got to work. The first order of business was to create a 3D model in the computer. Jason took the best photo he could and then drew out the outer ring of the fountain, matching the diameter. Then he repeated the same for the inner two rings – one we nick-named the “mushroom” due to is shape in the computer. The prisms were next, and were much easier to create than we had originally thought.

Once we had the basic shape all set, Jason broke apart the fountain into a few different components and I got to work. I sent the files to the 3D printer and watched as very slowly the fountain parts were made one by one. However there was just one problem – when the prisms began to print I noticed how tiny they were. What did we do wrong, why are these prisms so small?! Then it hit me, we created the fountain to scale… the base of the fountain is massive in comparison to the height of the prisms. I pressed on and assembled the fountain regardless, it was less than impressive.

This is when Jason and I decided we needed to take some artistic license and change the proportions of the fountain base as it relates to the prisms. We wanted this to be presentable and also have some height/size to it. No one wants to get a little tiny trinket type gift. Jason redesigns it and I make a single color print to test the size and shape – perfect. Now it just needs the tiles which Jason adds the next day and we settle on the PMS colors to use for the tile and grout.

First discussions with the factory, and the first question they ask when we tell them it is a model fountain? “Do you want it to pump water?” Wow, well, maybe next time! Upon further discussion we find out we dont’ have enough time for poured acrylic and will need to use resin instead. Agreed on a price, down payment made. Now its time to wait for the sample.

Factory sends us the first photos of the fountain, 3D printed to verify size and to use in order to make molds. Confusion on the exact type of lighting system to use, we draw some ideas

First video of LED light, and its too fast and blinking. Back to the drawing board.

First sample photo of the base arrives; mold test is complete. LEDs arrive at the factory

Base of fountain replica

Typhoon hits China, factory is with out power for 2 days

Power back at factory, we get our first video of the sample lighting up. We approve and ask for them to start mass production, at least of molding the parts. However we have light leak and part of the fountain has the wrong color. Sent a real photo of the fountain and we ask inside to be painted black to limit light leakage.

We also get the dimensions for the battery door on the bottom, Jason creates the artwork for the bottom and we decide to make it individually numbered.

First photos of the finished sample…wow… it looks great, but we have to ship by September 20th!

First production pieces come out of the mold as a test. Prisms are already in mass production. Cast, but not clear coated yet.

Looking Back at Tomorrow Fountain Gift Pillars in a basket

All bases are molded and ready for sanding. We realize how close we are cutting it. Decision is made to remove batteries and purchase separately.

All parts sanded, ready for painting and assembly.

Photos of final production, packaging are shared with us.

Production is finalize, boxed up and ready for pickup

JT picks up shipment and drives it to The Living Seas.

And at 7:45pm we finally unveil the gift! Watch below how it was revealed!

I know a special effects model builder from movies from the last 30 years and ever since I met him a wanted fir him to build this for me in acrylic and I was willing to pay good money fir the prototype and the 1 st one plus. Tge cost of the materials and split the money on selling more to us fans. He want do to the acrylic and he doesn’t use lasers or things like that

Thank you for going through all of that. It wasn’t totally worth it. We love ours and my son is super excited that he has #3! Great event and great gift!

Thanks for going through all that. What an amazing gift. My son is so excited that he has #3! Great gift! Great event!

Do you have any extra you would be willing to sell?

Just wondering if the 3D model has ever been released (or if there are plans to), would love to 3D print one … even if it’s just white 🙂

Man, I wish they would put that fountain back in or reconstruct it in the new remodel of EPCOT they are about to start.

can you make more of these fountain replicas. Still keep them numbered. My son stayed at give kids the world and he still talks about to this day. So i would like to give him one