At one time I had most of the Pictorial souvenirs from 1971 up to 1986 in my possesion. One day several years ago I came to the realization that from year to year only minor changes were made to the books and I really had no need to keep multiple copies of essentially the same thing.  The differences inside were minor, a changed picture here or there so I wound up selling them and keeping those in the best condition from each of the “Pictorial Souvenir Eras”… Over the years these booklets have provided us with photos and text that to this day captivates us. The final pages of each book always showcased via fanciful concept art what was coming in the years ahead. Sadly in the mid 1990s the format and size of the book changed, the photos became more advertising and less about the adventures and the magic slowly dwindled… But all is not lost, lets take a journey through the years of the Pictorial Souvenirs… 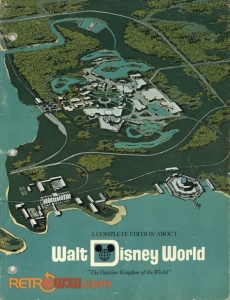 Back in the day when LBV was going to be a working community and the Walt Disney Company was seeking corporate sponsorship the very first book highlighting WDW was published. Titled the “Complete Edition About Walt Disney World”, this 22 page book was filled with concept art and very early construction photos.

This one is rare but turns up on eBay now and then, if you’re really lucky you can score one with the original corporate note from Pete Smith to the Licensees who received the booklet. Its hard to put this book into the “pictorial souvenir” category, but it was the first book of its type… Click here for a few scans of this booklet 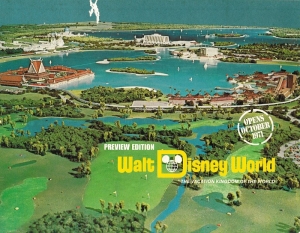 If the cover doesn’t get you excited then no retro WDW material ever will…The book at this point has taken on the shape and size we are familiar with. On the cover is a photo of the amazing concept model of WDW. I believe these booklets were sold at the Preview Center during construction.

Inside is barely a photo of construction, but its filled with concept artwork and imagineers hard at work creating animatronics and models. These puppies often pop up on eBay but they command at least $100 if not more for one that is in good condition.

We’ve got the entire booklet scanned in here. 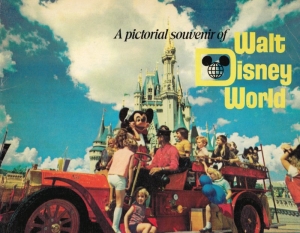 The colorful photo where hardly a person is even looking at the camera adorns the cover of this era, which I think is easily the best. The photos are so innocent, un-posed and filled with magic. The Kodachrome era is in full swing and some of the photos look like they were taken with 110 or 126 film cameras. The print registers on these booklets are often off on some pages, making the colors a bit wonky. The beauty of the yellow and green Polynesian Resort floor, the gracefulness of the Swan Boats and a sparkling clean Tomorrowland are all displayed…a thing of beauty.

1975 brings us a special treat, the most overused stock photo of Space Mountain ever, at least in my opinion – “Polka Dot shirt girl rides Space Mountain” as seen in the pic on the right. It goes hand in hand with the incredibly fake looking two-seater footage of Space Mountain that was used in a crap load of planning videos and DVDs, have a look at the 3:46 mark of this video 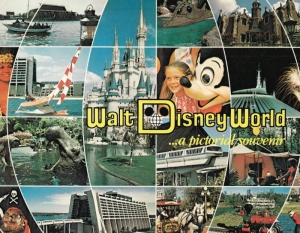 Attendance is up and so is the quality of the printing in this era of pictorial souvenirs. Inside you’ll find many of the same photos from the earlier era but shots of the newer attractions (Space Mountain, Thunder Mountain) are now neatly nestled in the pages. Some photos were updated to reflect some changing styles and color schemes, but the full 2 page spread for each of the resorts remain.

The last page highlights the Village Marketplace and its offerings. Oddly missing from the 1981 edition is any mention of EPCOT Center that was under construction, need to find an 1982 edition and see what’s inside.

Magic Kingdom Club members recieived this huge booklet (80+ pages) in the mail about 5 months before EPCOT Center opened its gates. If you are lucky enough to have one with the original letter and World Vacation brochure, you’ve got something nice on your hands. I have on here and its simply brilliant…I’ll have to scan it in.

But I digress, the book is filled with colorful concept art, advertisements/blurbs from pavilion sponsors and gives off a feeling of wonder and promise for the future. I align this book alongside the Preview Edition of years past, the quality and content hasn’t been surpassed. 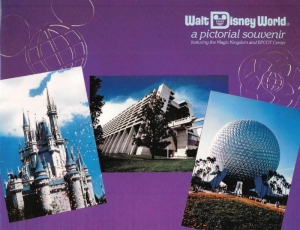 The Magic Kingdom and EPCOT Center are finally in a Pictorial Souvenir alongside each other. 64 pages of new photos, higher quality printing and thicker paper usher in a new age. Oddly the cover design, which is more 1993 than 1983, only lasts one year. Each of the Future World pavilions of EPCOT Center feature their circular logos and those of World Showcase have appropriate fonts for their host nations. Magic Kingdom has lots of new colorful photos. 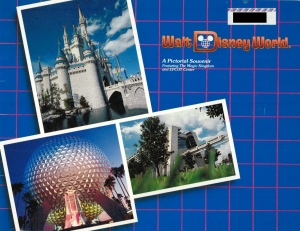 The cover from the prior year is replaced with an ugly blue and red graph design. Go figure. Inside, the book is essentially the same hardly receiving much of a change over the next few years. Changes here and there as some attractions close or go through a rehab. Our beloved Empress Lilly hasn’t been pirated by Mr Fulton, Horizons is still going strong and the World is full of motion…

We had reached equilibrium…a state of nirvana…but the downfall of the pictorial souvenir begins. I don’t have one, nor do I care to post a photo. The same format and size but now added is the Disney-MGM Studios, where you “can see movies being made”..uh, no not really. Just Bette Middler in the Lottery and a remade Golden Girls street. I’ll end it here, the photos from here on out first became more sticky sweet perfection than innocent magic, it actually could have been worse.

For 1990 and on, well we’ve got at least another decade before these become “retro” and are worth discussing…for now leave those books on the shelf…but their time will come. Besides, we need to find out if Polka Dot Girl every left Space Mountain!

What is that Taj Mahal looking thing to the right of the Contemporary on the ’69 pictures?

Wow! This is fantastic!

I have the 82 and the 84 Pictorials. I love paging through them even today.

I have 82 edition. No mention of Epcot in that one either.