In 2016 we held the Lake and Lagoon Tour where we commandeered a number of pontoon boats and sailed with our listeners on a tour of Bay Lake and Seven Seas Lagoon. Due to the small size of the boats we had a limited number of tickets to sell, as a result the event sold out in 9 minutes! We always knew we could do better, and in 2018 we held the tour again, only this time with a boat previously used for the Animal Kingdom Discovery River Cruise attraction!

Come along as we take you to some of the famed but not forgotten sights and landmarks including Roy’s Cabin, Rile’s Island, Polynesian Wave machine, the shoe tree, special monorail beams and more! Your RetroWDW hosts will explain the history of each as you cruise the lake. If you joined us or were unable to make it, this is a great way to relive the magic of days gone by!

In addition to the Lake and Lagoon Tour, come with us on a historical walk through EPCOT Center! Starting at the entrance fountain we take you through lost and forgotten areas including Computer Cental, Communicore and even show you where you’d be 3 feet underwater if it was 1985!

Special thanks to the entire Miles family for helping us out that day and editing this video for us. We’re humbled by your continued efforts to help us bring these tours and videos to our follows. Thank you!

You can get your very own copy of 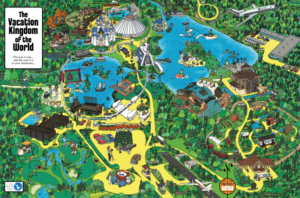 the special map created by RetroWDW’s own artist, Jason Bartel! This map celebrates the Vacation Kingdom of the World, and more specifically, “The way it was, and the way it is in your memories”. Taking the style and cues of the 1975 map (and the updated version from the 1976 edition of The Story of Walt Disney World) our version of the encompasses a world that used to be as well as some things that just didn’t make it. You may think Jason just traced the map, not the case…he hand drew every building, attraction, road, tree and detail, right down to the 71 hidden features and easter eggs included! 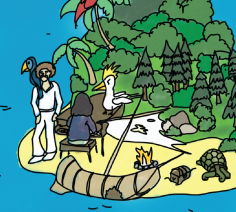 So just what are these hidden easter eggs? The entire map contains references to the stories, legends, and lore as discussed on our podcast. In total there are 71 specifically hidden features! We’ll give you one to get started, on the right you’ll see Pablo Cruise kicking out “World’s Away” as discussed in podcast episode 35! The band was featured in the 1978 TV special “Christmas at Walt Disney World”. And there is another hidden gem in this picture as well, did you find it yet?

You can get your own 24″ x 36″ copy of the map by making a $25 tax deductible donation to The Lake Buena Vista Historical Society!

GREAT tour! But I would like to offer some gentle clarifications/corrections, if I could. I am a former Watercraft pilot from the mid ’70’s – early ’80’s. During your tour, you mentioned a bit about the Admiral Joe Fowler steamboat ‘accident’. The details you provided for that story suggest to me that you may have that confused with the “Southern Seas” accident that resulted from a Dry Dock maintenance person removing a stern thruster and going to lunch, during which time the boat partially sank. I *DO* have pictures of this accident. Do your pictures show a *SIDE-WHEELER* or a… Read more »

James, thank you! I mashed together the two stores about the Southern Seas and the Fowler — I appreciate the correction. The Joe Namath story is, unfortunately, incorrect. I did a lot of research on the topic for the show and there were quite a few news stories about the refitting of the Eastern Winds in the local St. Pete paper after two gentlemen who owned a yacht company here bought it from Disney. My friend’s father worked for a local stereo company that refit her with speakers after the purchase and he supposedly has a scrapbook of photos that… Read more »

Also, Old (fun) Watercraft tradition: In the course of piloting the various boats, should anyone run aground, that part of the lake would be known as ” Reef”. Also, the ‘barge fire’ referred to in the tour….it was a “Lightshow (utility) whaler” that was carrying the fuel cans for the Electrical Water Pagaent outboards for use later in the evening. I also have pictures of the burnt-out hull of THAT boat as well.