When the Grand Floridian resort opened and replaced the Contemporary as Walt Disney World’s flagship resort it had all the luxuries and decadence you would expect.  Fine dining venues abounded and Flagler’s was an upscale sit-down restaurant that specialized in Italian cuisine in the evening (because in the 1980’s fine-dining Italian was at its peak in popularity).  In the morning’s it was the place to have a nice breakfast away from the hustle and bustle of 1900 Park Fare and its chaotic character meal.

This inaugural breakfast menu for Flagler’s has all the lovely things you’d expect:  A history of Henry Flagler and his contributions to the state of Florida (along with some excellent cover artwork), a signature breakfast drink: the Floridian Sunrise (orange and lime juice with honey, nutmeg and a whipped egg), fresh muesli, broiled grapefruit, veal sausages.  Anything you’d expect the upper crust to enjoy for breakfast is on the menu alongside souped up versions of traditional breakfast favorites.

So enjoy perusing the finest breakfast to be had in Walt Disney World in 1988.

In 1998 the restaurant was rebranded Citricos as it remains today. 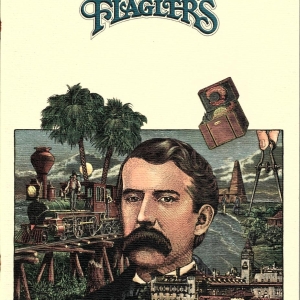 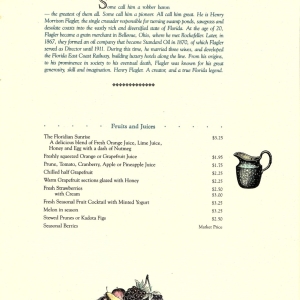 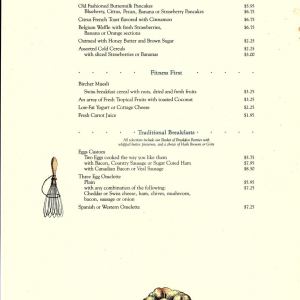 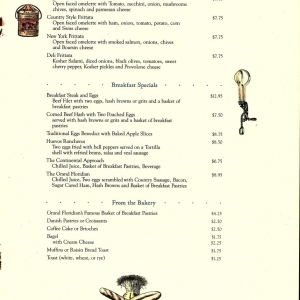 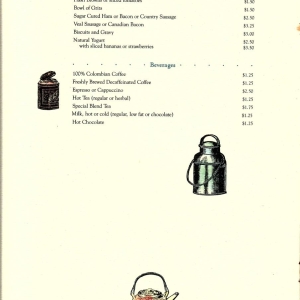