We are happy to bring you the first of several uncommon media souvenirs known as “Show PAC”’s, a 35 mm slide set accompanied by a soundtrack.

Until the videocassette took hold as the dominant form of home media in the 1980s, Walt Disney World produced souvenir media in a variety of formats. On our site we have chronicled 8mm souvenir films that act as park overviews an in some cases feature specific attractions or parades.  Disney sold these films into the early 1980’s until they were replaced by home videos of EPCOT Center specifically and Walt Disney World overall.

PanaVue 35mm photographic slides were a hallmark of tourist attractions around the world and dozens were produced for Walt Disney World and Disneyland. You can find those on our website as well.

Just after the park opened General Electric released a Walt Disney World for it’s “Show N Tell” a combination record player and auto-advance filmstrip projector. They were popular in homes and classrooms in the 1970’s and dozens of record/filmstrip combos were published throughout the decade. Passport2Dreams digitized a copy of Walt Disney World’s a few years back.

The Show PAC we feature in this release was released in 1975/76 and sold in the theme park as well as by mail order. The sets came with a cassette tape and 40 numbered slides. A viewer would load the slides into their projector and then put the cassette in a tape player and a clanging bell would indicate when to advance to the next slide. This one, “The Magic Kingdom at Walt Disney World”, features many photographs that appear to be specifically taken for this set and do not appear in other promotional materials of the day. 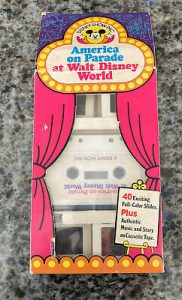 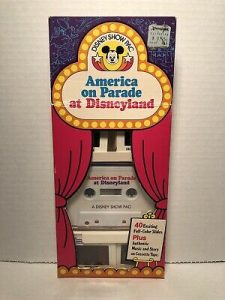 A fair amount of restoration and color correction was done on these slides. We hope you enjoy them.