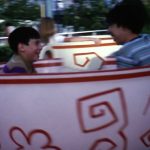 Arthur Gottlieb filmed a few minutes of the family vacation back in September 1972…just as the Magic Kingdom was to celebrate it’s first birthday. The film opens with Tomorrowland’s majestic spires. Our subjects, the Gottlieb Boys, take a spin on the not-yet-covered-by-a-canopy teacups. They then head over to 20,000 Leagues Under The Sea where we’re treated to a glimpse of the signage before shots of the sub traversing the lagoon.

A nighttime view of the castle closes out this short film of a visit to a teething Magic Kingdom.