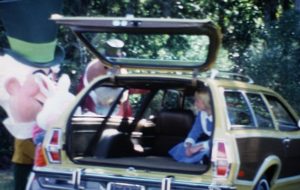 This unique film was taken by a member of the crew of a Ford Motor Company advertising agency as a “behind the scenes” glimpse of a photo session featuring Ford’s 1974 lineup and some Disney characters. The first scenes were taken alongside the wooded area in the center of the Magic Kingdom parking lot. The second series were taken on the access road behind Town Square at the Magic Kingdom.

While we don’t have the exact moment on film that all of these shots were taken, we think you’ll find the photos in this ad match up to some scenes in the film!

After wrapping up the photo shoot our cinematographer heads to the Magic Kingdom where he captures an incredible 15 seconds of the fabled Eastern Winds Chinese junk ship sailing past the Magic Kingdom. This boat was moored at the Polynesian Resort in the early years as a party ship. Disney painted the teak deck causing it to rot and the ship fell into disrepair sitting in Seven Seas Lagoon for several years before they finally sold it in the late 70’s. To our knowledge this is the first movie footage anywhere of the boat at “sea”.

After catching your breath from this amazing sight spend a few minutes wandering the Magic Kingdom at dusk and after dark. We benefit from the talents of a professional photographer when the film closes out with a nice glimpse of Main Street USA lit up after dark.

What exactly is that flying above the tree line around the 7:15 mark? It almost looks like a hang glider?

My dad had a yellow Ford Pinto around this time until about 1978. One of the reasons I probably only have owned a Chevy 😉