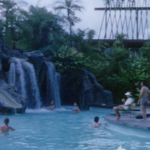 This incredible film includes ample footage of the grounds of the Polynesian Village Resort in 1974. We open with a panoramic view from area between the Ticket & Transportation Center and the Maui (now Raratonga) longhouse. Note that the area being filmed is the present day location of the Pago Pago, Moorea & Tokelau longhouses (built in 1978 and 1985).

Plenty of images of the monorails gliding to and from the resort are featured – following them all the way over to the Contemporary’s Grand Canyon Concourse where we spend about a minute watching Monorail Red disembark and embark passengers before heading back to the Polynesian for terrific footage of the original volcano pool & slide.

Take special note of the terrific pan of the waterside and marina. There are so many different watercraft (astute viewers will note the bob-around boats in the very rear of dock area). This is a really special film for fans of the Polyneisan and it’s history of an unmatched serene tropical atmosphere.

Wow. How vast and uncluttered. So few people (except for the waiting at the monorail). Made me want to jump in a time machine, go back and take a sunfish out for a sail on Bay Lake.

I miss those early days! There really was something ‘magical’ about the Polynesian those first couple of decades at WDW. It was like living in another world for a few precious days.