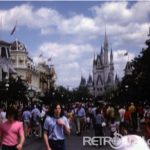 A few days ago we posted a home movie from 1976 featuring a very patriotic Magic Kingdom. Unbeknownst to us, the film was actually two home movies spliced together – it was not until we released it that @MKPony alerted us that we had a home move from ’72 and ’76 clipped together. So back to the editing room we went, cutting the two films apart and re-uploading them as two separate films. Here is the 1972 portion as a stand alone film

After a trip down Main Street USA with many unnecessary zooms and quick pans we jump into Fantasyland and on to Adventureland where we spend a few minutes in the Treehouse and then a quick visit to the Tiki Birds. The next 2 minutes are so give us a glimpse at an early Jungle cruise. We end our day as a sidewheeler approaches the Magic Kingdom and then a few rare seconds of the pool and beach at the Polynesian Village.