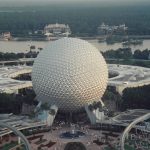 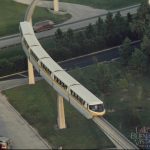 Featured on our last live movie night, this found footage is an awesome helicopter tour of Walt Disney World in 1988. Shot on 35mm film, we’ve restored and remastered it into a beautiful 4K resolution and we’ve added an additional interpolated 60 frames per second video!

The film starts with the helicopter taking off from the STOLport and follows the monorail followed by a flyover of the main parking lot and Bay Lake. There are great shots of the side-wheeler boat docked at the Contemporary. The film continues over Future World at EPCOT Center, where we see the Wonders of Life pavilion under construction, as well as a shot around the World Showcase lagoon (see if you can spot the omnibus!)

Next up is the under-construction Disney-MGM Studios and the Earful Tower. The film contains a number of close flybys of the iconic water tower and then proceeds over what will become Catastrophe Canyon and the rest of the tram tour. While most of the building exteriors are nearly completed, the film shows many of the walkways, streets, and landscaping still to be completed. The film wraps up with a few more dramatic fly-bys of the water tower before returning for a landing at the STOLport.

We have to thank the Miles family of Florida who stumbled upon this film at a flea market. Thank you so much for finding this!

Choose below, the original 30fps version or the enhanced 60fps interpolated, both in stunning 4k!