Three people will give a shit about this post. That’s ok though because that makes it well worth it.

Take a look at this picture: 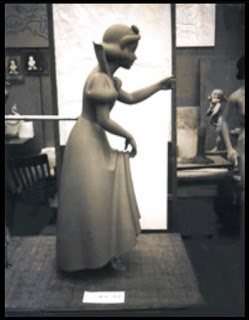 The Magic Kingdom of Walt Disney World and included the attraction “Snow White’s Scary Adventure”. It was great but guests always wondered why they didn’t see Snow White anywhere in the ride. The official story was that YOU were Snow White and you saw these adventures unfold through her eyes. That’s a fine story but they never bothered to tell the guests that which left them confused.

In 1971 Fantasyland was way behind schedule. Not as bad as Tomorrowland but in need of some trimming to make the opening. So much got chopped. Entire attractions were scraped and replaced with known favorites like Snow White and Peter Pan.

This Snow White pictured above appeared in Disneyland’s 1983 remake of Fantasyland but it was originally sculpted for Walt Disney World. How do I know? Look at the awesome background figures.

On the right, in the background, IS THE SCULPT FOR THE COPPERTONE GIRL that once graced the center of Mickey’s Mart in Tomorrowland at Walt Disney World! Hold on it gets better. To the left, behind Snow White’s ass, is the model for the PLAZA SWAN BOATS of the Magic Kingdom!!!!

What this means, folks, is that you SHOULD have seen Snow White in the original MK attraction but time and budget restraints kept that from happening.