Over the years nary a fortnight passes between the last “Back to School” commercial on television and the first Christmas or holiday-themed ad starts running.

In simpler times, in this case 1989, you usually didn’t start seeing holiday ads on television until a week or two before Thanksgiving.

This past year the Lake Buena Vista Historical Society acquired over 400 internal Walt Disney World public relations slides.  A lot of them were promotional images we’d seen used over the years but one in particular we saw, researched and set aside for the 2021 holiday season.

In fact I tweeted on April 17th for someone to please remind me when the holidays rolled around.  No one did.  So you’re all fired.

Update: I found video of at least one Isotoner ad filmed on Residential Street at Disney-MGM Studios.

Somebody remind me when December rolls around so I can write an @lbvhistory article about it.

Or maybe Christmas in July.

The slide described an advertisement for Isotoner being filmed on the Disney-MGM Studios backlot in the Residential Street area.  The image was no doubt created to promote the Florida studio as the ideal place to film your winter-themed commercial, movie or television show. 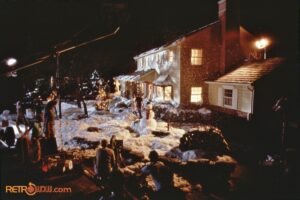 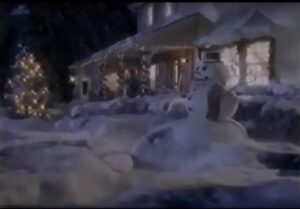 Isotoner ads were omnipresent annually during the holidays as the perfect gift: a set of Isotoner slippers or gloves is the preferred choice of any man, woman, child or pet.  Or so we were told.

It took some time to locate the actual advertisement, buried in a collection of ads from the era.  This copy pulled from a Youtube compilation isn’t the best quality and the segment that used the exterior shot being filmed in the slide is brief but now the world will know that ad was filmed at Disney-MGM Studios.  At least the exterior shot anyway.

And thanks to Justin Stone we now know about this b-roll footage of the ad being filmed!:

🚧 How much did it cost to dispose of that fake snow? Or did Disney repurpose the fluffy flakes at “Blizzard Beach”…?