Sometimes one or two images will pique my interest in a set of slides.  This particular dual set of 35mm slides were from different film brands, were individually numbered and included some hand-assembled slides (literally film glued into a slide holder) that were photographs of images from the 1971 book The Story of Walt Disney World.  The slide set and its order indicate it was part of a presentation given by a professor or enthusiast to classes or civic groups or some such thing.  While these slides were dated March 1972, noting when the film was developed and the slides were mounted, they are clearly from December 1971 based on some of the visible Christmas decorations and toy soldiers on parade. (You can Check out the whole gallery!  in our pictorial souvenir!)

The photographer captured some really interesting and unique stuff. First and foremost, somehow they got access to the utilidor and grabbed an image of that plus the earliest example of a utilidor map posted on the wall (note the Tomorrowland under development notation!).

There’s some great peeks at Adventureland including either the first or second location of the always-on-the-move Tikis.

You’ll see some great early vistas from outside the park and at the Contemporary and Polynesian but as most (all) of Tomorrowland hadn’t been built yet the Contemporary is clearly visible from Main Street just beyond the Plaza restaurant. 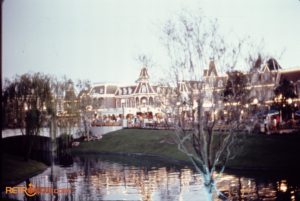 Speaking of the Contemporary one of our images not only shows the shuffleboard courts next to the square pool but it shows people playing shuffleboard! 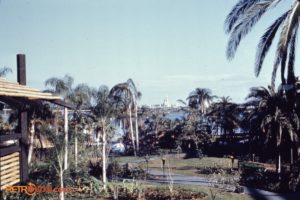 This is not our earliest set of photos from the World but it is a good glimpse of the Magic Kingdom and resorts after WDW got its sea legs.

Check out the whole gallery!

The pic on right of 4th set from the top, is that a giant sundial? Assuming it’s at the Contemporary, is it still there?