Home » Blogs » Kingdom of Memories » WDIdolatry: Monkeying Around With The Jungle Cruise

This article is part of ongoing series posts of random things that I did back in the early 1990s (I was barely in my 20s) when I wanted to pursue a career at Walt Disney Imagineering. Some of it is OK(?), some of it is terrible. My hope is that others who want to go into the themed entertainment industry can learn from my mistakes. Even through I didn’t ultimately get a job at WDI, I have a very fulfilling career and use many of the skills that I developed during these creative explorations. All is not lost if you never get to Flower Street!

For a time in the 1990s my love for Walt Disney World’s Jungle Cruise had turned into a love-hate relationship. While I had absolutely adored the attraction as a child (it was always the first thing I wanted to ride), by time I was in my 20s it began to feel tired and unfunny and I decided to explore the idea of removing sections of the ride that weren’t successful and replacing them with something that perhaps told a more unified story or at least gave the skippers something more interesting to react to than empty canoes. As I put it then: 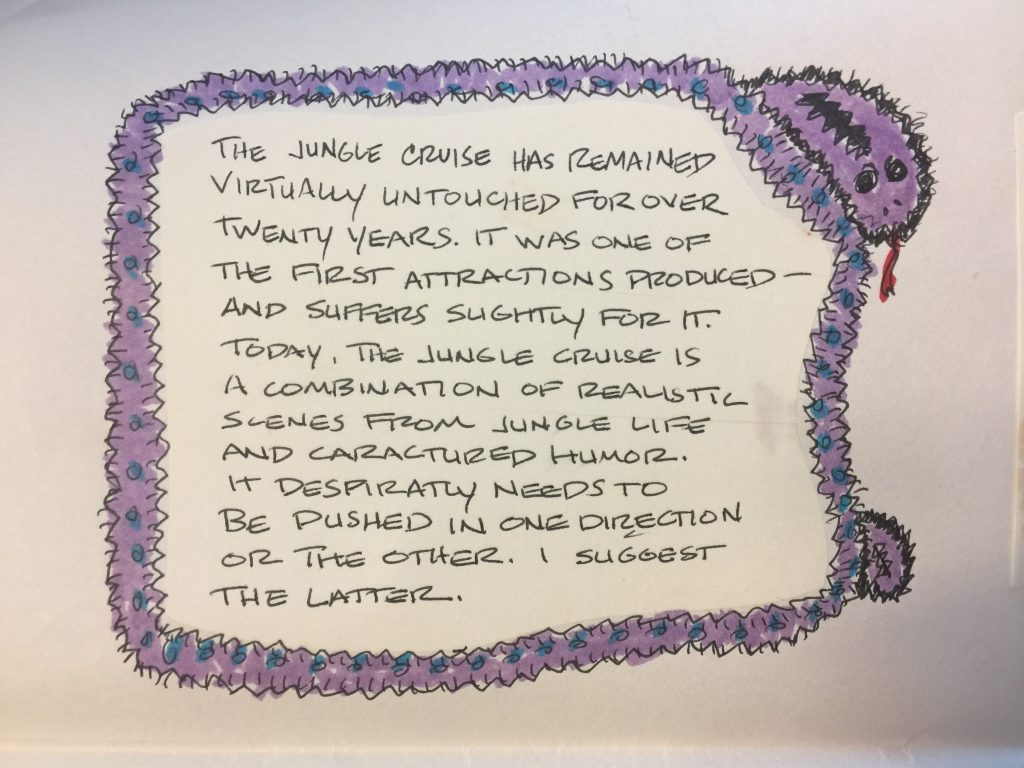 One of the things that bothered me happened just as we got into the rainforest, which at the time was 100% plastic plants. As we’d clear the butterflies, the standard skipper spiel warned passengers that the vines were sometimes known to grab guests out of the boat. So why not show that? 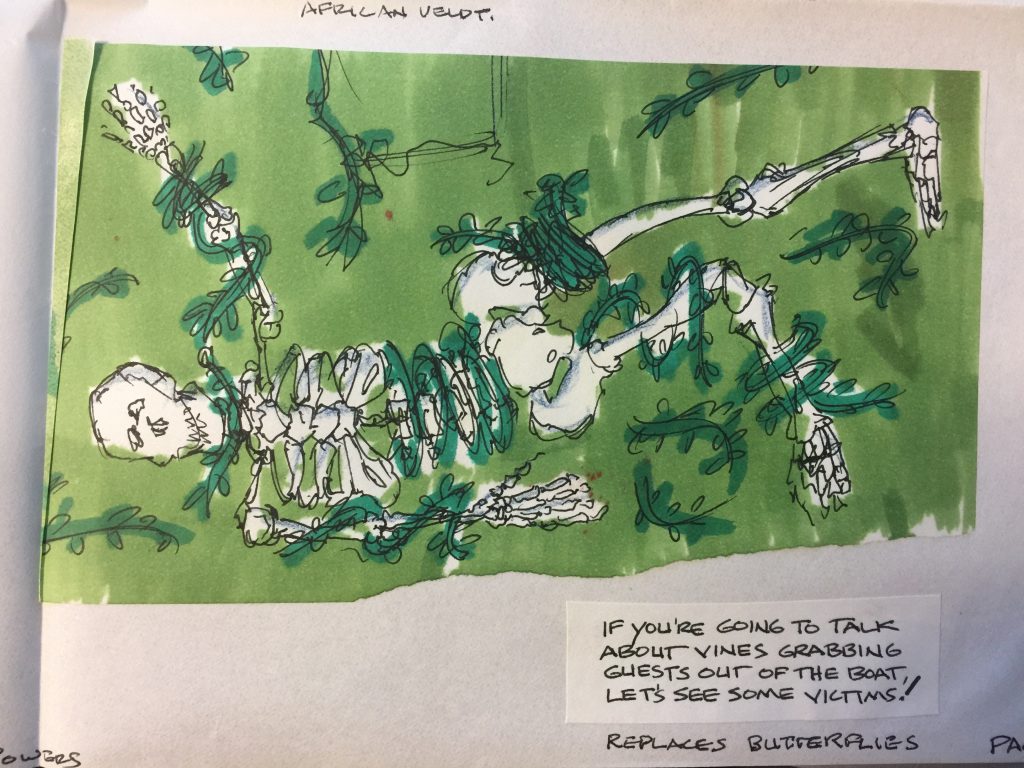 Skeletons probably cost all of $35 then, so it would have been a fairly inexpensive addition and certainly no less gruesome than the piles of skulls that litter the attraction in other locations.

Remarkably, Imagineer Christopher Merritt revealed at the 2016 D23 Destination D event that Marc Davis had planned for a tableau of man-eating plants at the end of the rainforest, where the short-lived frogs were located. Perhaps the spiel about the vines was intended to set up this gag?

One of the ideas I began kicking around then was trying to unify the attraction with a coherent storyline. I began to experiment with the idea of taking the Lost Safari and building the attraction around them: riders would see them multiple times during the ride as their situation became more and more hopeless. The leader of the expedition would be Dr. Stanley Livingroom; the boat docks would be updated to show his ownership of the building and company (The recent story addition of Dr. Albert Falls and the Jungle Expedition Company shows that perhaps this idea actually had a little merit — admittedly Dr. Albert Falls is a much better name).

This scene of a jungle traffic jam would replace the Pygmy Village, which continues to not look anything like a village due to the constrained space that didn’t allow for Davis’ forced perspective raised hut. A lot of this scene is intended to set up things we’ll see later: the flipped jeep when the gorillas take over the camp, the elephants in the bathing pool, and the porters, who were fez-wearing natives in these less politically-correct times.

The space between the elephants on the shoreline and the veldt felt a bit dead, so to fill the space I envisioned the safari encountering that enduring trope of the adventure film, quicksand. 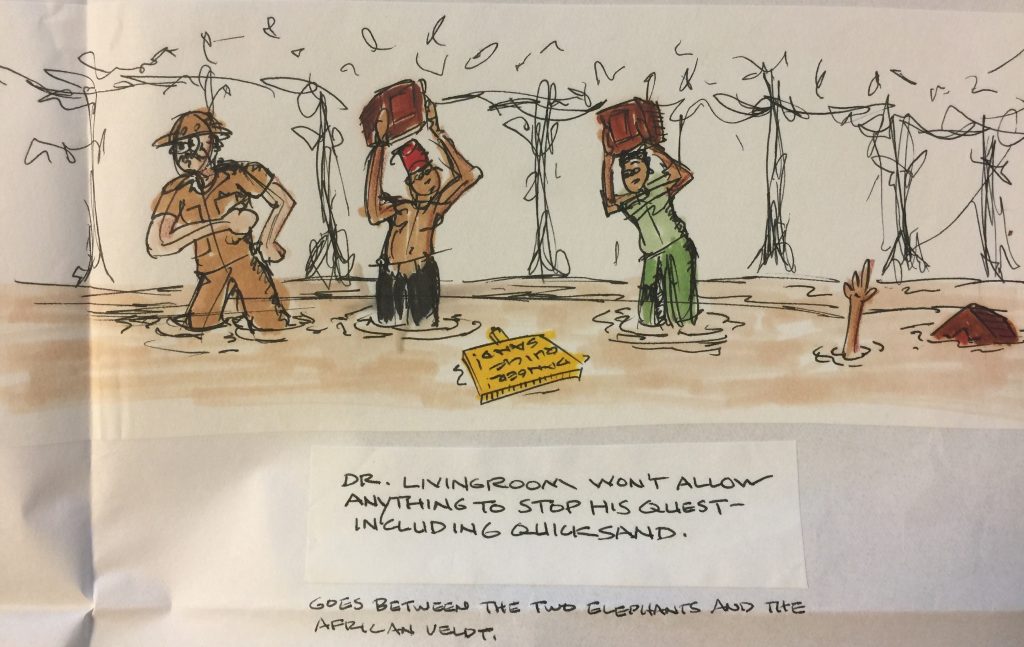 As is the case with the trapped safari, it’s never a good idea to be the last man in the group.

This scene would replace the headhunters that follow the dancing and drumming villagers. By the ’90s it appeared not very many people were willing to play along with the skippers’ requests to duck down in the boat, so I came up with this replacement which, in retrospect, feels very much like a Marc Davis gag. Once again, I worked off of a very typical jungle movie comedic trope: 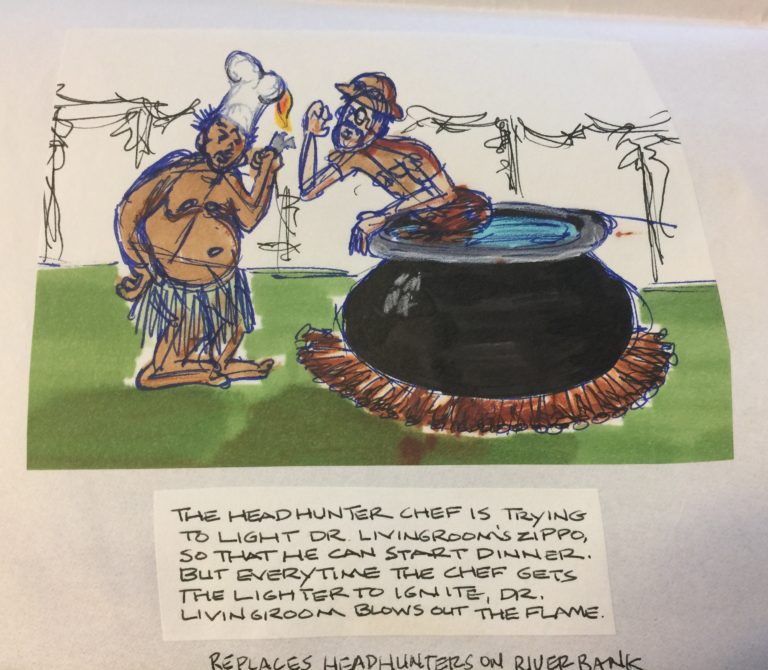 The cycle gag would work like this: as the native cook lit Dr. Livingroom’s zippo lighter to start the file, the good doctor would lean out of the pot and blow the flame out.

The Return to Civilization

I think there is one big lesson here for students who are considering a career in themed design: don’t copy another artist’s style just because you like it, especially if you can’t pull it off.

Here I was, without the years of drawing practice, the understanding of animal and human anatomy, and art technique trying to emulate the look of Marc Davis’ fantastic sketches. They’re terrible! This is a mistake a lot of student artists make, to emulate their inspiration. In hindsight, I could have used any art technique as long as communicated the set-up and action of the scenes. Just be yourself.

The post WDIdolatry: Monkeying Around With The Jungle Cruise appeared first on Kingdom of Memories.