Occasionally we come across something that is not directly related to Walt Disney World but piques our interest.  That is what happened when I came across this 1985 Sesame Place brochure at a flea market this past weekend.  As a Philadelphia-area resident where the first and for a long time only Sesame Place is located I’ve always had a mild interest in the place.

This stems largely from the fact that, until a few years ago, I’d never been there.  I was six when Sesame Place opened in 1980, a few years past Sesame Street’s target age.  To boot:  My mom had no interest in taking me and my siblings.  Back then kids didn’t get to do whatever they felt like.  If we had a birthday party it was cake and hot dogs in our kitchen or burgers at McDonalds, not renting out the local Bouncetown for $1000 and inviting 30 kids.  But I digress…

When Sesame Place opened it had no mechanical rides.  No coasters, no spinners.  It was ball pits, moon bounces, mazes and obstacle courses and things you’d find at the most elaborate playground you can imagine.  A water park was added soon after and over the decades a limited selection of mechanical rides have been added including two small coasters in the 2010’s.

Two things grabbed my attention when I saw this brochure.  First, the computer lab/classes for families on the inside cover.  1985 was a pivotal year in home computer ownership as it was around that time that most families with school-aged children/teens realized they’d eventually own a computer as opposed to it being an expensive luxury that only the weird family down the street had. In 1980 it seemed as likely to parents of young children that you’d own a nuclear reactor as to own a computer.  By 1990 your family might as well have been among the Amish if you didn’t have a computer in the house.

So in the mid 80’s there were all kinds of franchises, community schools and the like that taught people how to use computers.  It was fun to see that Sesame Place had a program for doing that using Apple IIe computers.

The second reason I picked up this brochure was the “Indoor Fun” section.  Often these days when someone asks me whether I think EPCOT could ever return to its EPCOT Center roots I tell them no.  The reason for that is simple economics.  In 1982 you paid the highest theme park admission prices on the planet to go to EPCOT Center and do cool things there you couldn’t do anywhere else.  The Imagination pavilion’s “Imageworks”, Communicore and Spaceship Earth’s Global Neighborhood post-show area all had exhibits you didn’t find anywhere else — and they blew your mind!.

Just three years after EPCOT had opened you can see Sesame Place has recreated a bunch of the things you could do in those EPCOT “play” areas, as parks and museums across the country continued to do over the next two decades.  As those experiences became available, and even commonplace, at museums and attractions closer to home there’s less of an incentive to pay the highest theme park admission prices to go do things you can do at home for a lot less money.  What park goers expect for their money is an experience they can’t get at home.  So as Disney continues to chip away at what’s left of the original EPCOT Center this 1985 brochure gives us an early “canary in the coal mine” view into why and how some of that has happened.

That said, I always advocate people patronize their regional science and learning museums that are awash in attractions and experiences in line with the old EPCOT we remember and love.  When we did our Communicore episode in 2018 we discuss this and, with our listeners, compiled a small and incomplete list of places like this you might want to visit.  You can find it here. 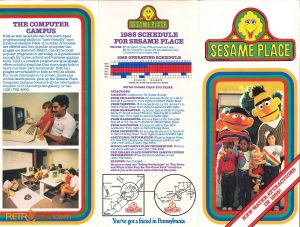 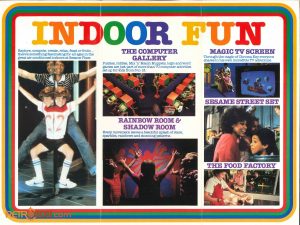 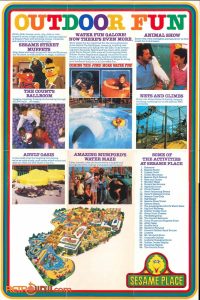 Wow, this brochure is great, thanks for sharing it… I went to Sesame Place around 85-86 when this stuff was new, and remember seeing all these things. I’m the oldest child in our family, so it wasn’t for me, but it was neat to see the TV show in “the real world”, and my little brother and sister and their friends really enjoyed being there. I also saw EPCOT for the first time in the summer of 1985, and remembered thinking Sesame Place was “ok” but no where on the same level as EPCOT, I understand your point though… I… Read more »

I grew up in Doylestown and went with my sister’s Girl Scout troop in the 82-83 time frame. It felt like it was a million miles away but literally about 35 min from our house. As I grew older and realized it was so close, I could never figure out why we didn’t go every weekend. Up until a few years ago I still had some of the Big Bird tokens they gave you to play the video games. They were not traditional arcade games but themed video games where a character would do some simple activity or game. Simple… Read more »