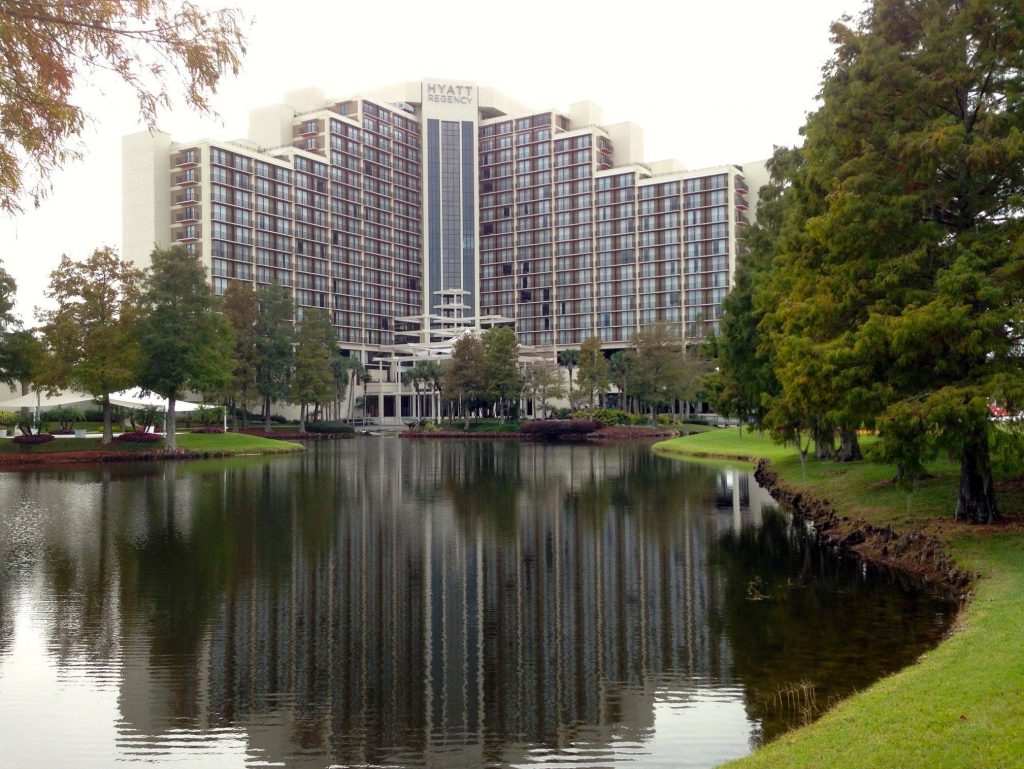 One of the missions of the Lake Buena Vista Historical Society is to preserve the history of not just the Walt Disney World resort but some of the ancillary developments surrounding the resort.  When a set of photographic slides taken in November 1984 of the Hyatt Regency Grand Cypress recently became available to us we jumped at the chance.  The gallery appears at the bottom of this post.

When it opened in February 1984 the Grand Cypress was the resort area’s first 5-star, 5 Diamond resort.  Michael Eisner and his team of budding hotelier Imagineers reportedly stayed there and took notes, incorporating aspects of the Grand Cypress into Disney’s Grand Floridian and other Disney resorts built in the late 1980’s and early 1990’s.

There are a lot of legends associated with this property.  One is that the original owner/developers (there have been a half dozen, though it’s always been managed by Hyatt) were Japanese and filled the resort with an extensive oriental art collection.  Many of the statues remain on the grounds and add to the unique and lush atmosphere.  You can see in the photo album they were present in 1984 when the resort opened. 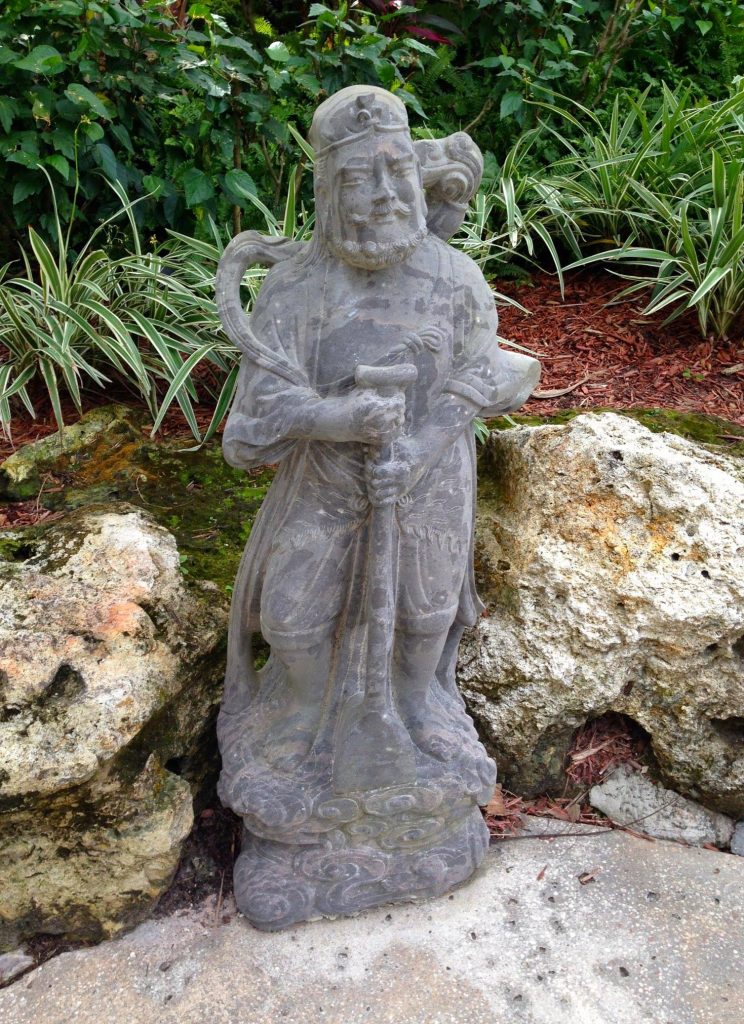 Second, the property used to have it’s own trolley.  This is true.  A trolley used to service the whole Grand Cypress complex which included the Hyatt, a golf resort community and a planned community that was not built (but the undeveloped land was recently sold – again – with big development plans)  The trolley has been gone since the early 1990s but there is amazing Super 8mm movie footage shot of it in 1988 you can see here.  One of the trolleys from Grand Cypress ended up at the National Capitol Trolley Museum in Colesville, Maryland.  If you manage to check it out please send us photos! 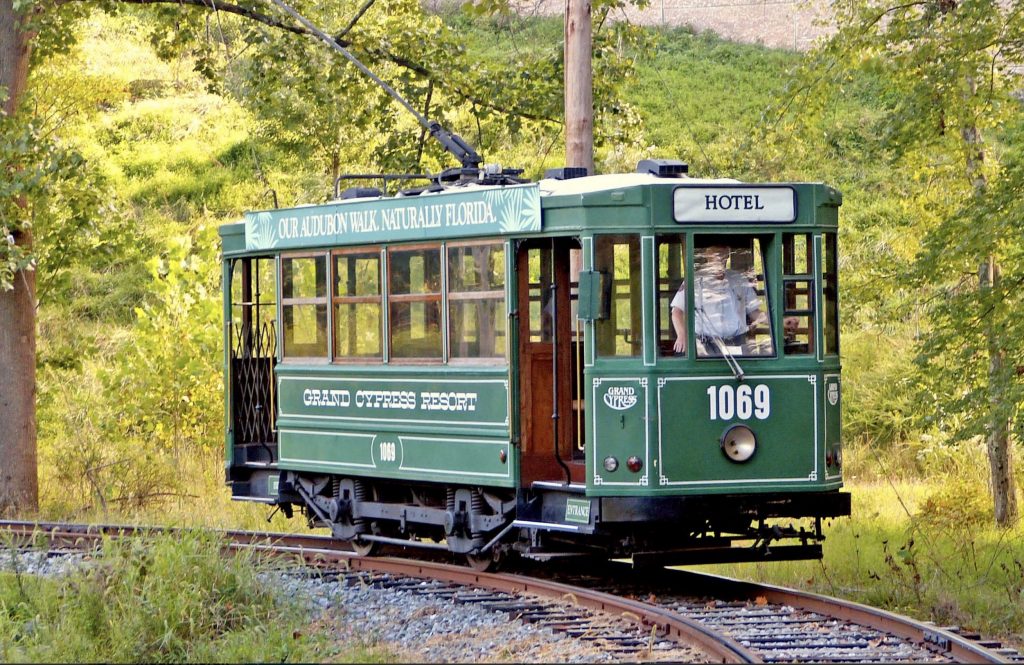 There’s a reason the photographer in 1984 took so many pictures of the pool area in 1984.  It’s enormous by any hotel standards. It includes a grotto (cave) you can swim through that leads to a few nooks and a hot tub.  There’s a suspension bridge over the shallower pool and Disney-quality rock work surrounds the entire pool complex on one side while the beaches of Lake Windsong, a sizable area for boating and fishing, borders the other side of the pool area.  Chairs, hammocks, walkways and bridges abound.  One friend told of horse competitions that were held on the grounds in the 1990s and the western town ruins of that area are visible if you visit today.

The hotel was built with a convention center and both indoor and outdoor event spaces in mind.  It remains a popular location for conferences and conventions.  As you can see from some of the aerial photos in the album it is built right on the border of Disney property.  It is set back and isolated from a lot of the chaos that now surrounds it but it’s physical location is just across the street from the Disney Springs-area resorts and Hotel Plaza Boulevard.

Let’s talk about dining.  The Grand Cypress WAS legendary for an elaborate Sunday brunch that used to be served each week at La Coquina.  The brunch and the restaurant have been gone for about a decade but they reenacted it for the resort’s 30th Anniversary in 2014 AND I caught a glimpse of that white grand piano that was a lobby feature in our 1984 slides and is now tucked away in the defunct restaurant!  A nice review of that anniversary brunch and brunch history is here.  The semi-casual dining spot Cascades which featured a large waterfall on the far wall has been renovated in recent years to become the Lakeside restaurant.  The food is still good but the waterfall no longer cascades. 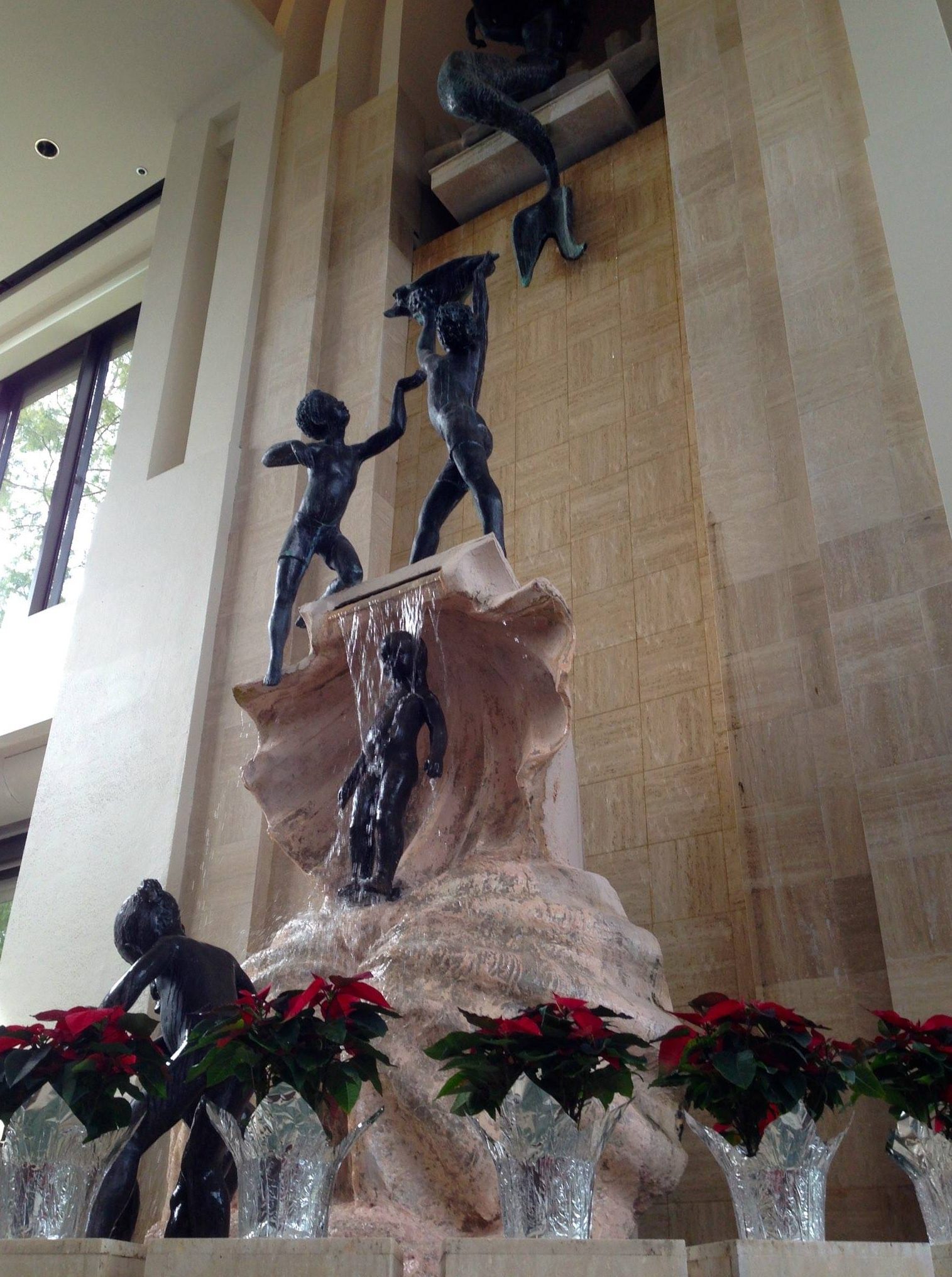 Hemingway’s deserves its own paragraph.  It is featured prominently in many of the 1984 photos in this album.  It’s named after some-time Floridian (and my personal favorite) Ernest Hemingway who fished the waters of Key West, Florida while writing some of his best novels.  I adore this restaurant.  Shuttered during the 2020-21 pandemic and recently renovated inside, the restaurant still features stellar Florida cuisine.  It is the resort’s high end restaurant that channels both elegance and, at the same time, a relaxed atmosphere.  Whenever someone asks me for a unique dining suggestion “near Disney” I always suggest Hemingway’s.  It’s perch over top of the pool gives resort views without ever feeling like you’re in a hotel (and the crab cakes are justifiably famous).  When it reopens please go and have a Papa Doble on my behalf. 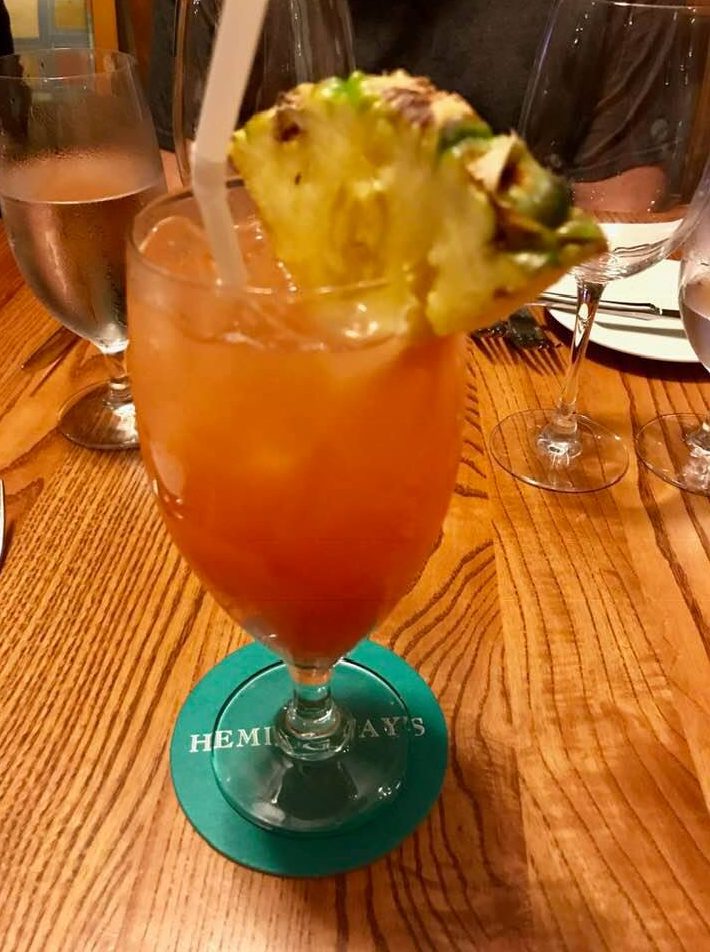 Tom and Sarah Bricker’s Disney Tourist Blog has a terrific review of the hotel, it’s current-day features and a very nice recounting of a meal at Hemingway’s.  It’s worth your time.

Finally — A longtime feature of the Hyatt Regency Grand Cypress resort is the mascot:  Merlot the Parrott. He holds court over the lobby each day from mid morning until early evening and sometimes he’ll say hello to you. 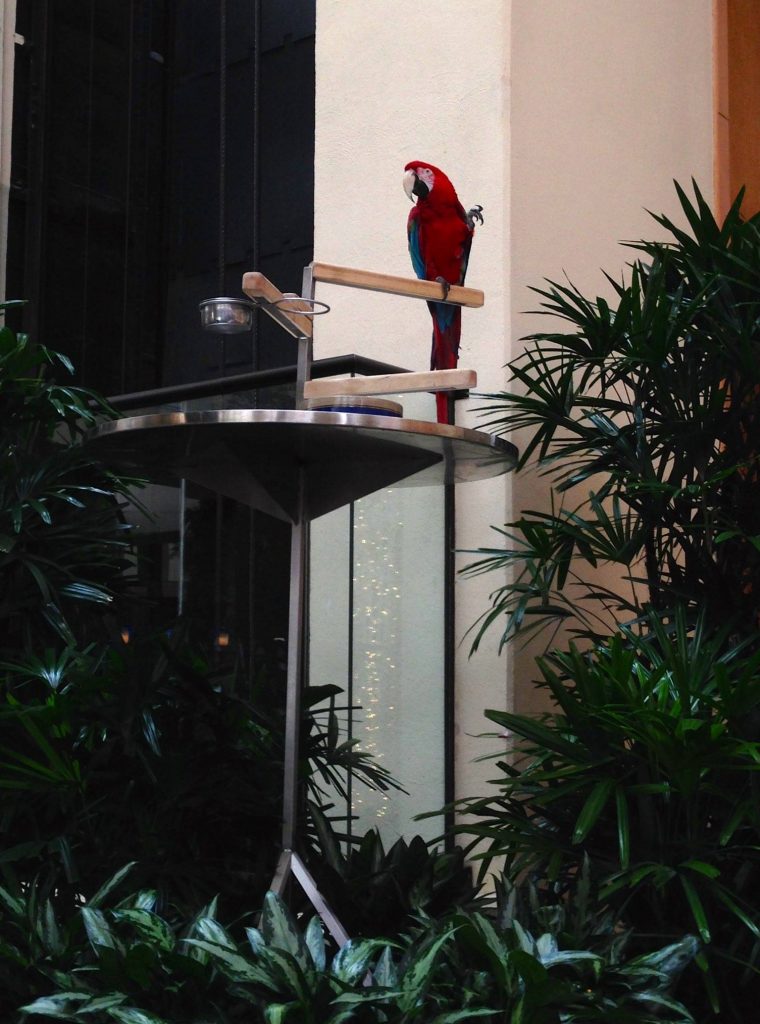 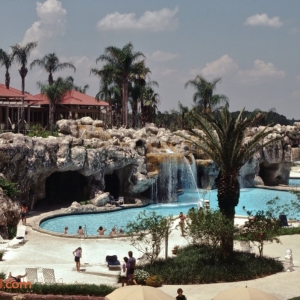 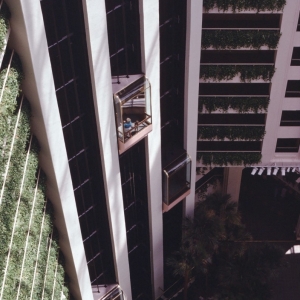 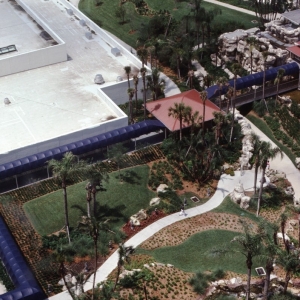 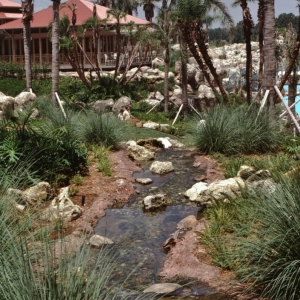 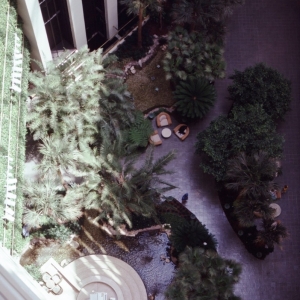 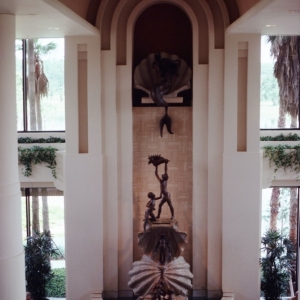 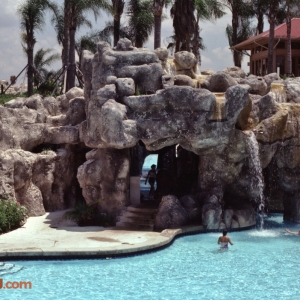 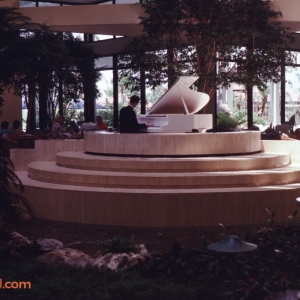 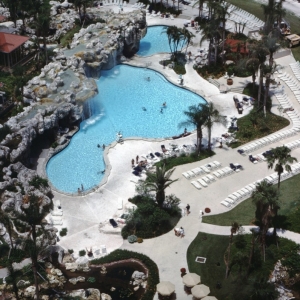 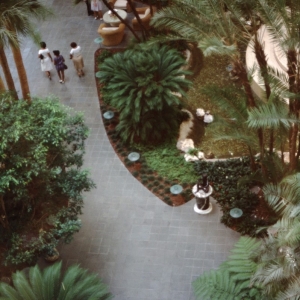 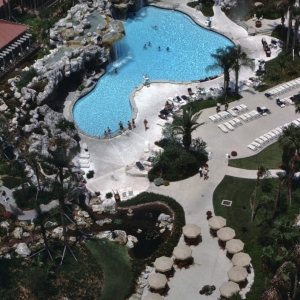 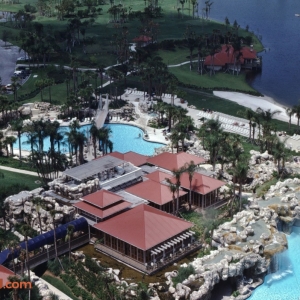 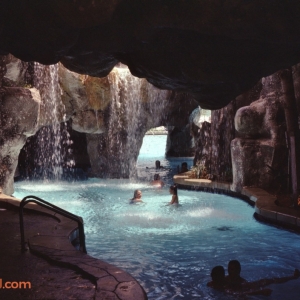 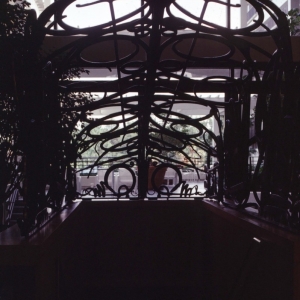 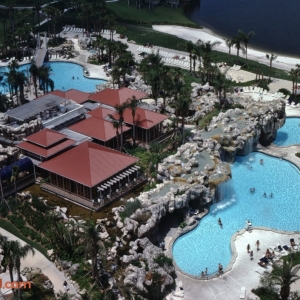 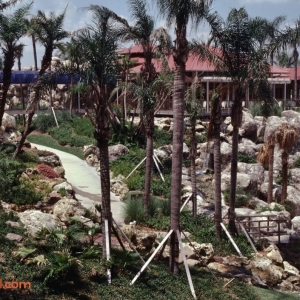 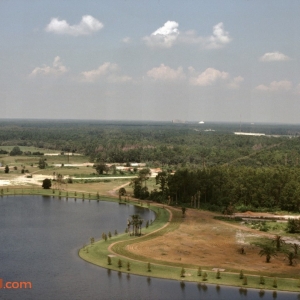 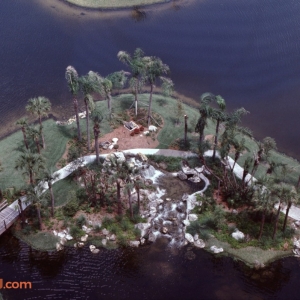 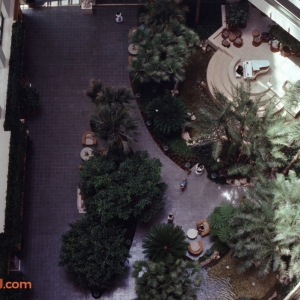 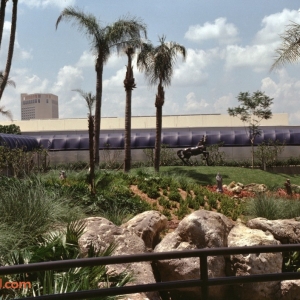 Fantastic article! The Trolley is amazing.

Thanks for this! My father was the Director of Security at Hyatt Regency Grand Cypress on the opening team and for a decade after (he left Hyatt in 1994 to take the same role with Sea World). I spent much of my childhood roaming the resort and have so many vivid memories. I can remember what piece of artwork/sculpture was where at what point in time lol. I remember riding the green trolly quite often as well. I have so many random and fascinating stories, both from my own experiences and from my father and his various interactions over the… Read more »

Oh my gosh…please tell me you recall the beautiful mermaid artwork on the wall…I can’t remember if it was a painting or sculpture but it was near the escalators!

Just now saw your comment re: mermaid art near escalators and omg my head just exploded from this memory haha! 🧜🏻‍♂️🧜🏻‍♀️🧜🏻🤯 I know EXACTLY which mermaids you are referring to and it’s sooooo weird/awesome to think about those mermaids now as an adult and as someone who appreciates art and understands all of the work that goes into it and just thinking about the scale and massive size of that artwork when it was something that I was just used to seeing all the time (and frankly which creeped me out a bit as a child lolol) it’s just kind… Read more »

Richard–Please give my very best to your Dad–he TRAINED me in Security back when I started in ’84…I remember when you were born, but do not recall seeing you on property–that is what getting old does to you. Thank you for the lovely write up and the mention of your wonderful Dad.

What became of the jade boat in glass case in lobby?

I stayed here in the early 90s..does anyone have a photo of the beautiful mermaid and hippocampus art that was near the escalators? I have been searching for it for many years!!!!!

Here are a couple of photos from the Presidential Suite of the hotel (I want to say there maybe two, that were identical?) featuring my mother and myself as a baby. Every once in a blue moon we would get the chance to stay there as a family. It was gigantic, multiple floors (I remember the bathroom was upstairs and very fancy) and had a white grand piano just like the one in the lobby and also a humongous humongous humongous terrace.

Lame, for whatever reason they won’t let me post my photos so I’m trying a different way…

Enjoyed the jogging course this morning in this beautiful hotel. I saw the trolley tracks and became curious. What a wonderful website. Thank you so much for this great read!

We flew in from the UK in mid 1984 and were immediately overwhelmed by the welcome we received. My wife, and children aged 7’and 4, got out of our taxi from the airport and were welcomed by porters in white tails who put our luggage onto fur lined trolleys… We checked in for the Regency Club and entered the glass lifts where we were shown how to enter our key cards to select the restricted floor access. The lifts shot up above the atrium where a pianist was playing a white piano beneath a Boticelli -‘ type shell cascade waterfall..… Read more »